Regarding the history of the archtop guitar, I was loosely aware that Orville Gibson created the arch, and Lloyd Loar (as a Gibson employee) added the f-shaped sound holes. It tuns out that was not at all the full story. And neither is the following, but hopefully it will give you pause for thought.

One of the earliest depictions of an arched guitar-like instrument (in this case a viola da mano, showing the Borgias family at play, painted by Bernadino Pinturicchio in 1493, now in the Vatican) is very interesting, but is probably too early to be related to the 20th-century archtop guitar. But it is interesting to note that we have all been here before, in a sense.

A member of jazz guitar.be, called Ol’ Fret, mentioned a German archtop maker in 1855. Here’s the patent, followed by “a rough translation” by Ol’ Fret himself:

“Improvement on the guitar by Heinrich Walker of Goetershausen. Even the famous instrument maker, Heinrich Walker von Goetershausen, has come up with the improvement of the Guit. [guitar] and wrote down his experiences in his publication: Magazien musikalischer Tonwerkzeuge Frankfurt a/M, 1855 (See construction and making of the Guit., pages 246 and 250 with illustration). In the introduction, he speaks as follows. The poor sound of the guit. made me think of reinforcing it with a more violin-like shape. Some attempts, where I had set myself firm rules, led me to a quite favorable result.
Guit. built according to these rules get a very pleasant, full and round tone, also a very pleasing appearance to the eye.
With this construction, the top of the Guit. gets an arch, and two f-holes (like the violin) instead of the sound hole. Like the bridge, the fingerboard has a small radius and sits freely above the top. The back is also slightly arched. The strings are attached to the bottom of the sides with rounds and are covered with a flap.
The remaining parts are as with the ordinary guitar.

The book by Eduard Fack was written in 1884. Some spelling rules have changed since then in the German idiom, and it seems Mr. Fack was not overly familiar with orthography: The correct name of the above mentioned “Verfertiger musikalischer Instrumente” (musical instrument maker), a luminary of his time, was Heinrich Welcker von Gontershausen.

Gontershausen published some fundamental works: Unsere digitalisierten Werke alphabetisch nach den Namen ihrer Verfasser – Welcker von Gontershausen, Heinrich . Since that library is in walking distance of one of my whereabouts, I should really spend some of my spare time …
Conveniently, they digitalized that book, and we can go through it – on occasion, it’s only 446 pages: just click on the listed publication from 1855!

I’ve just located Merrill’s patent describing the arched top and back, from 1896. Long, but worth a read:

(No Model.)
A. H. MERRILL. I MUSICAL INSTRUMENT.
No. 555,651. Patented Mar. 3, 1896.
WITNESSES: INVE 0/? A 7TORNE Y.
UNITED STATES PATENT OFFICE.
ALBERT HERVE MERRILL, OF ATLANTA, GEORGIA.
MUSICAL INSTRUMENT.
SPECIFICATION forming part of Letters Patent No. 555,651, dated March 3, 1896. Application filed May 24,1895. Serial No. 550,542. (No model.)
To all whom it may concern.-
Be it known that I, ALBERT HERVE MER- BILL, a citizen of the United States, residing at Atlanta, in the county of Fulton and State of Georgia, have invented a new, original, and
vuseful Musical Instrument, termed a Chordola, of which the following description, in
connection with the accompanying drawings, is a specification. a
My invention relates to a stringed musical instrum ent of the percussion class, of the guitar and mandolin type, in that it is in-. tended to be picked by the fingers or a plectrum of horn or metal, the tones thereof having a peculiar and distinct character to itself and harmonizing more perfectly with the tones of the violin or bow family of musical instruments than any other stringed instrument heretofore made or used, and possessing greater carrying power or penetration of tone than any of the similar classes of stringed instruments, rendering it avaluable and useful addition to the musical world for solo, concert, and orchestral work. I attain this re sult by making a body or sound-box with eggshaped hoop or sides and graduated convex back and top, to the upper extremity of which and as a continuation of the main air-chamber is a smaller secondary air-chamber, both said air-chambers being necessary tov obtain the required tone. To the upper end of the secondary air-chamber is attached the neck, and 011 the top surface of the neck is fastened the finger-board, furnished with metal frets at the proper intervals to produce the tones and semitones. At the upper end of the neck is the carved head or scroll, furnished with any number of pegs or keys (according to the number of strings used, my preference being six to eight) to stretch the strings to the proper tension in order to obtain the notes or tones desired. The lower end of the fingerboard does not rest upon nor touch the top of the body or sound-box, but projects over it to any sufficient distance for the required number of frets.

The top and back of the body or sound-box of this instrument are concave upon their inner surface and convex upon the outer, and are made thickest near the center, which is the point of least vibration or greatest resistance, and thinnest at the edge where they are glued to the hoop or sides. Such graduation has never before been applied to instruments of percussion. The back is made solid, but in the top or sound-board on each side of the bridge, so called, over which the strings pass (and the position of which bridge determines the length of string to be used and the position of the frets upon the finger-board) and near the edge of the top, is cut out an f or sound hole of peculiar but necessary shape, and on each side of the projection of the finger-board in the secondary air-chamber is another sound-hole of different shape. These four holes are for the purpose of emitting the sound-waves produced in the body or soundbox by the vibration of the strings communicated to the top by the bridge and are of just sufficient size and of proper shape to produce O natural, (as termed in the language of music,) the true acoustical tone of such instrument, and if said holes are varied in size or form the tone will be changed.

Upon the thickest portion of the top or sound-b oard stands the bridge,having two legs or feet and furnished upon its upper edge with a metal wire or fret over which the strings pass. At the rear of this fret is a slight upward proje’ction of the wood, through which are cut slots of sufficient number to accommodate the number of strings to be used, and which slots prevent the strings from moving and rattling when being played upon.
On the inner or under side of the top or sound-board, with its strongest parts directly under the two legs or feet of the bridge, are glued two bars of wood, pointed at each end and widest in the middle, running longitudinally with the grain of the top or sound-board to strengthen said top in sustaining the weight or tension of the strings when tuned for playmg.

At the lower end of the body or soundbox of the instrument, and attached to the hoop with a small’screw or screws, is a metal tailpiece, so called, bent at an obtuse angle that it may not touch nor rest upon the top or sound-board, to which is fastened one end of the strings used, the other ends being attached to the pegs or keys in the head of the instrument, heretofore described.

All taken together, I have a neat, compact, useful, and artistic appearing instrument of peculiar tone and shape having an entirely original and different character from that of any instrument heretofore made.

For a better comprehension reference must be had to the accompanying drawings, forming a part of this specification, in which like symbols indicate corresponding parts, and wherein- Figure 1 is a front elevation of the complete instrument in its necessary and therefore preferred form, in which A represents the body or sound-box; O, the fretted fingerboard attached to the upper surface of the neck and projecting over but not resting upon nor touching the body or sound-box; D, the carved or scroll head, through which and projecting from its upper surface are the pegs or keys a a a a a a; E, the bridge, and F the tailpiece or string-holder. b b b b are the sound-holes, in form as shown.

Fig. 2 is a side elevation showing the swell in the top or sound-board and back, B the neck, and G the hoop or sides.

Fig. 3 is a longitudinal cross-section of the instrument, showing the arched or concavoconvex form of the top or sound-board and back, (represented by II and I,) graduated thickest in centers and thinnest at edges; also the projecting finger-board C and the bars of wood K strengthening the top H, c showing the strengtheningblock inside each end of the body or sound-box and f f showing V- shaped linings to strengthen joinin gs of hoop or sides with top and back.
Fig.4 is an interior plan view of ihe top,
showing the four sound-holes Z) Z) I) I) and the two supporting-bars K K.

Fig. 5 is a longitudinal section of the top or sound-board, showing longitudinal bars or braeings K and the manner of graduation. The point of greatest thickness of both top and bars or bracings lies immediately under the bridge E, and the graduation is made with this point in View.
Figs. 6 and 7 are the front and end views of the bridge, L L representing the legs or feet which rest upon the top or sound-board to support the strings, and cl the wire fret in the bridge, and g is the projection of the wood above the fret, in which are cut the slots 0 0 1: c o 0, through which the strings pass and are held in place.
What I claim, and desire to secure by Letters Patent, is-
In a stringed musical instrument of the percussion class the combination of an egg shaped main air-chamber, or body, with a smaller secondary air-chamber, the raised neck with scroll, or carved head, and the projecting fretted finger-board, the graduated concavo-convexback and top, or sound-boari’l, the said top having the four f, or sound holes of the form shown, and the longitiulinal bars, or bracings, upon the concave side; also the bridge with its two legs, or feet, fret and slots, the purposes of all of which are substantially herein set forth.
ALBERT HERVE llll lltlllllll.
lVitnesses:
RoBr. LEE Avnnv, CLYDE L. BROOKS.

William Wilkanowski (b. Poland, 1886) – associated in the US with Gretsch guitars of the 1940s. Fine short biography of Willy here: https://tarisio.com/cozio-archive/cozio-carteggio/william-wilkanowski/ 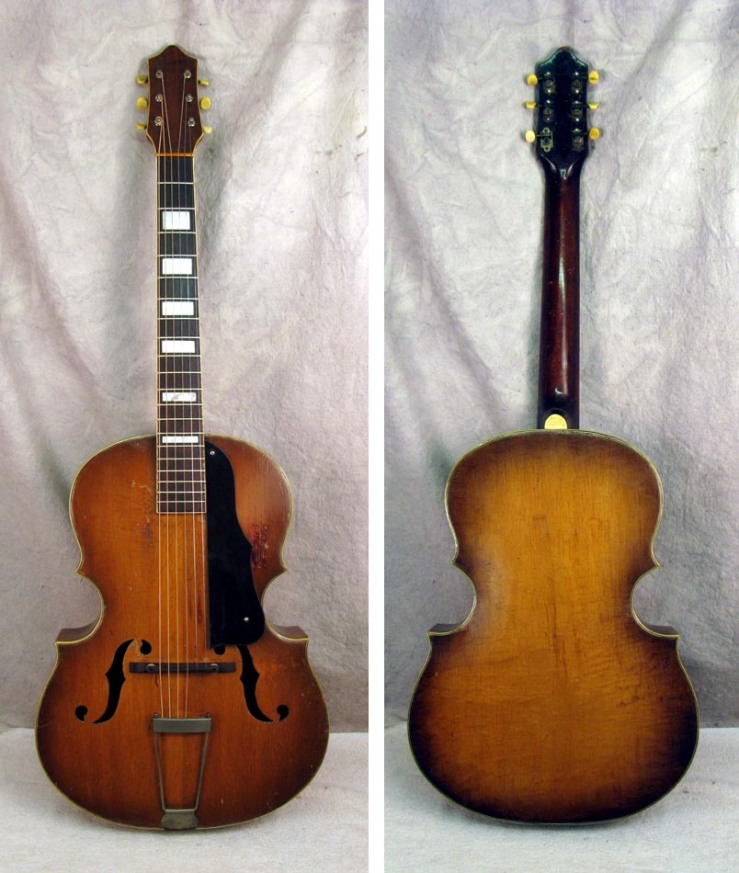 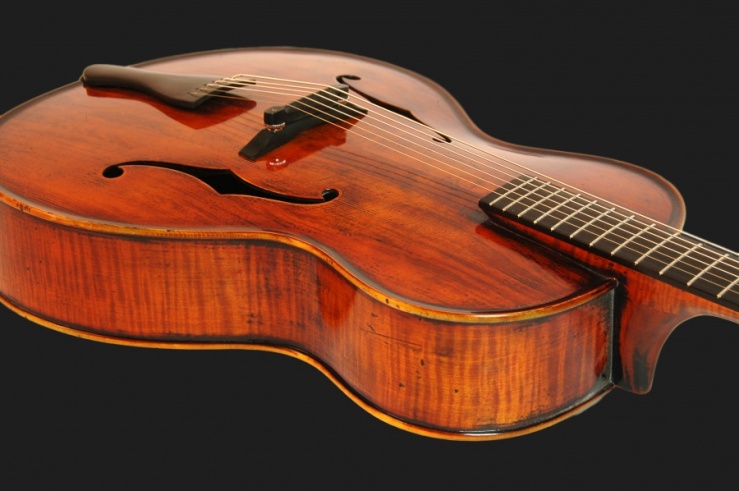 The Amati by Dan Koentopp. Webpage.

=====================
To sum up, Lloyd Loar did not invent the archtop guitar, nor was he first to add f-shaped sound holes. But he did work for Gibson, who eventually emerged as the company most equipped and ready to support the burgeoning Swing boom after Loar left.

The instruments Loar did develop while at Gibson were intended for ensembles playing popular classical tunes, and this includes the guitar. Although he doesn’t seem to have viewed the guitar as a solo instrument (seeing it instead as a useful member of a mandolin quartet) the Gibson L5 became the instrument of choice for the greatest soloist of his generation, Eddie Lang. So, right from the start of the L5 legacy, the instrument was associated with popular and classical music, as this 1927 recording by Lang perfectly illustrates:

Lutes, guitars, ukes - I play and teach. View all posts by Rob MacKillop

This site uses Akismet to reduce spam. Learn how your comment data is processed.