…of the Plectrum Guitar

I have an interest in the Plectrum Guitar, which is often associated with jazz but in fact has a much wider repertoire and practice. One could fancifully trace it back to the vihuela penola of 16th-century Spain, or ‘Latin’ and Moorish guitars of the medieval period, but for most people the work of Eddie Lang would be a good starting place.

If you want to play some solo archtop music, The Masters Of The Plectrum Guitar from Mel Bay Publications, 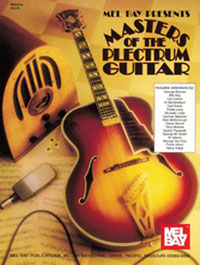 has a wealth of material in it, including some items by Eddie Lang. This page of the website is devoted to this book.

The work of Harry Volpe has got my interest of late. An Italian-American, Volpe rose to become one of the leading guitarists of the 1930s and 40s, and teacher to Joe Pass, Sal Salvador, Al Caiola, and many other jazz guitar luminaries. His compositions from the late 1930s reveal classical music traits amongst jazz harmonic twists. Try for instance this very beautiful solo guitar piece from the aforementioned Mel Bay book, the lyrical My Cherished Prelude:

In a classical music vein:

Midnight Clear. This was the first video I made on the day the Loar guitar arrived.
Unfortunately my recording techniques were not up to scratch, so the sound is weak. If I get time, I’ll do it again.

The video, ”Romantic” at the top of this page is also by Volpe.

Later, Volpe would become more associated with swing guitar, and was famously photographed playing with the great Django Reinhardt:

Although associated with music publishing, Mel Bay (1913-1997) was a brilliant jazz guitar player and fine arranger. Here is his version of Sweet Lorraine, which I perform in a slightly melancholic way. It is also available in Masters Of The Plectrum Guitar (Mel Bay Publications). The video starts with the aforementioned, Romance, by Harry Volpe. Sweet Lorraine starts at 1’35”. 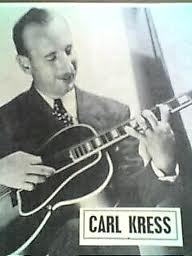 Carl Kress was one of the greatest guitarists of the 1940s, and teacher to Joe Pass, and many other notable jazz guitarists. His solo works are wonderful explorations of harmony and melody, uniting jazz and classical aesthetics, and well worth studying by today’s guitarists. There is a little bit about him on this wiki page. He used a tuning based on the tenor banjo, which he played early in his career, notably with the great Paul Whiteman Orchestra. The pieces I play here are in standard tuning, and can all be found in the Mel Bay “Masters Of The Plectrum Guitar” book.

This is a beautiful guitar solo by Hendrickson, but I recorded it the day after this guitar arrived. I had put flatwound strings on, but they cut the volume in half. I might record it again later.