First we had better dispense with “What is a Plectrum Guitar?“, as there are two distinct things to consider. When banjos ruled the roost in early jazz, most people played either a four-string tenor banjo, or a four-string plectrum banjo. The latter was originally a five-string instrument which was too quiet when played with the fingers to contribute to hot jazz ensembles of wind instruments. So, players started using a pick or plectrum to amplify the sound. Pretty soon after, the instrument lost its high-drone 5th string, becoming a four-string instrument, tuned variously as CGBD, DGBD, or Chicago Tuning: DGBE (the same as the top four strings of a guitar).

When the guitar started becoming more popular, banjo players created guitar versions of the tenor and plectrum banjos – four-string guitars, either with a short neck (for tenor players, tuned CGDA) or with a long neck (for plectrum-banjo players). They of course became known as tenor guitars and plectrum guitars. THIS IS NOT WHAT I AM REFERRING TO WHEN PLAYING THE PLECTRUM GUITAR.

As far as this website is concerned, playing the plectrum guitar means playing an archtop guitar with a plectrum, rather than fingerstyle. And it also implies playing this way both as a solo instrument, and in group situations too.

So, for those who have asked me what steps to take to being able to play the kind of music you see me playing in my videos, I suggest the following:

Mel Bay Modern Guitar Method Complete Edition, Volumes 1 & 2: This is a circa 700-page method in plectrum guitar playing, which includes some of the solos in my videos, such as Adelita, Traumerei, Ode for Mr. Van Eps, Mighty Lak A Rose, and more. It also contains most of the scales, chords and arpeggios you’ll probably ever need, including many advanced jazz types. There is no tab, and nor should there be – you should not be dependent on tab editions, as real-world musicianship demands you can read standard notation well. I can still learn from this Method, and highly recommend it. On-line recordings are available for much of the material.

25 Graded Pieces For Plectrum Guitar (Hampton Music Publishers): compiled and edited by Adrian Ingram. This is a British publication, with British composers, and many of the pieces are included in the Trinity Plectrum Guitar Grade Syllabus – useful for checking your progress. I have a page devoted to this book HERE. It is a repertoire book from fairly easy to fairly advanced levels. No tab.

Linear Guitar Etudes by William Bay (Mel Bay Publications): 57 studies in plectrum playing. No Tab. These are excellent studies, which I use to keep my technique and reading skills in trim. And, yes, I have a page devoted to them too, HERE.

An excellent book of modern plectrum studies for the guitar is by Christian Vasseur, which I highly recommend. They have their dedicated page HERE.

The above should keep you very busy for a number of years. You can supplement your studies with repertoire from the Masters Of The Plectrum Guitar book, Sal Salvador’s Collection of Classic Solos for Pick Style Guitar, and William Bay’s Concert Solos book, all available from Mel Bay publications.

I intend to make a technique video soon, but in the meantime here is an introduction I gave to interpreting a piece by William Bay, which discusses approaches to interpretation.

I teach via Skype, and privately from my home in Edinburgh. My students range from complete beginners (who are most welcome) to advanced players who are already playing gigs. Check out my Skype Lessons page. We could work through any of the above-mentioned books, or study some of the pieces in my videos, or look at something completely different.

Of course, if you wish to play music from a specific period, say, the 1930s, then it’s a good idea to not only listen a lot to the music of that period (that’s essential), but also look at the publications for guitar from that period, many of which can be found on eBay and elsewhere, and downloaded from online stores such as http://www.djangobooks.com/Category/guitar_ebooks

You might notice that many of the early guitar methods are arpeggio/chord based, rather than scales, though this is not 100% the case. But it does give us some insight as to how musician’s viewed the guitar fretboard, and music itself, in the early jazz and swing era. Also keep in mind that many of the chords discussed cover six or five strings, sometimes four, i.e. not the three-part chords often used in comping in a jazz context.

Here is a short list of some interesting period books:

Eddie Lang’s Fingerboard Harmony for Guitar – a preparatory book for the “Modern Advanced Method” discussed below.

“By ‘Fingerboard Harmony” is meant the study of the construction of the chords, and their location (in all their different forms) on the guitar fingerboard. Many chord forms never before published are included. The most valuable feature of this method is the explanation and illustration of correct chord relations and their proper “resolutions” on the fingerboard. In this volume the basic chords :- Major, Minor, Dominant 7ths, Diminished and Augmented, will be treated.” 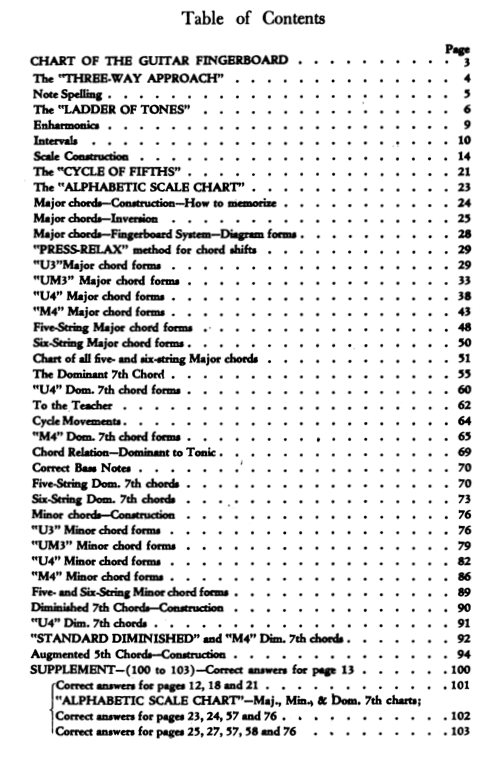 Eddie Lang Modern Advanced Guitar Method – “This book is intended for advanced players. It is taken for granted that the student knows all chords (in all their forms or inversions) key signatures – scales, etc. Students not familiar with any chords referred to here, will find them fully explained in Eddie Lang’s Intermediate book, “Fingerboard Harmony” for the Plectrum Guitar.” – You have been warned! 🙂

Be prepared for a major workout of six, five and four-string chords and arpeggios! Types covered include Major, Minor, Dominant 7th, Diminished 7th, Major with added 6th (common in the swing era) and more. There are examples of his “Famous Cadences”, with fiery runs between chords.

An intriguing book from two of the greatest players of their generation, it contains “143 Exercises, with valuable explanations leading the pupil from the simplest to the most modern chord-formations and teaching all the effective, up-to-date “Tricks””

HERE is a pdf of this long out of print volume.

Anthony Antone’s Ultra Modern Book of Chords – yes, yet another chord book! Here is a typical page from this useful book:

There are many more books, not least Mickey Baker‘s two volumes (which get their own dedicated page HERE) and the first George Van Eps Method (ditto HERE).

None of these books set out to teach improvisation, though what they contain will certainly be used by you when improvising. They are mentioned here as they will give you excellent reading skills, and a knowledge of all the most important chords, arpeggios, and scales, that you will need for most of your playing. These are the fundamentals from post beginner to advanced levels, and should be studied carefully.

Lutes, guitars, ukes - I play and teach. View all posts by Rob MacKillop

This site uses Akismet to reduce spam. Learn how your comment data is processed.